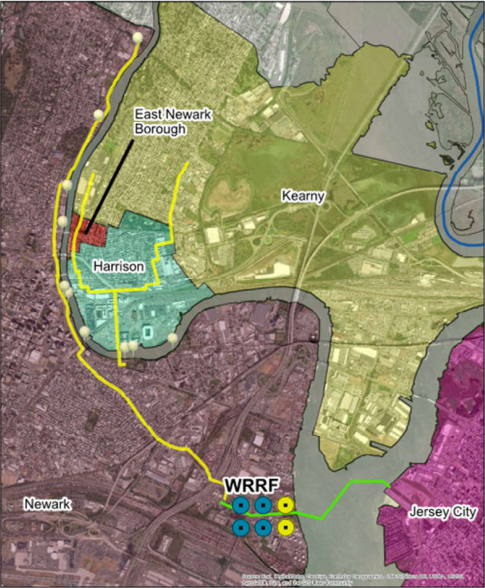 What does this mean for the final Long Term Control Plans?

Who is collaborating on regional plans?

The sewer treatment plants and combined sewer overflow municipalities they serve are working together to develop the regional plans. These include:

*NHSA owns the pipes and the treatment plant. The following cities are served by NHSA but are not permit holders: Hoboken, Union City, West New York, and Weehawken.

What are the regional alternatives?

The regional alternatives are infrastructure upgrades that the sewer treatment plants can make such as increasing the amount of flow to the plants and the plants’ treatment capacity. Bypass of secondary treatment, also known as wet weather blending, effluent blending, or high-rate treatment is being considered by most of the wastewater treatment plants to increase the capacity of the plant. Learn more about this option in this fact sheet developed by the Clean Waterways, Healthy Neighborhoods Initiative organized by the Passaic Valley Sewerage Commission. Improvements to sewer infrastructure that the plants operate and own are also being considered like increasing the size of the pipes, pumping capacity and regulator modifications to increase the flow to the plants. Regional storage tanks and tunnels are also under consideration by the Bergen County Utilities Authority, the Passaic Valley Sewerage Commission and North Hudson Sewerage Authority to store flow during wet weather and pump it back to the treatment plants during dry weather.

North Hudson Sewerage Authority is the only sewer treatment plant that owns the plant, sewer system, and outfalls. Their plan includes sewer treatment plant upgrades and more municipal focused infrastructure upgrades like green infrastructure, and inflow and infiltration upgrades. Find a full list of the regional alternatives being considered from the Development and Evaluation of Alternatives Reports at the end of this post.

The municipal alternatives that are being considered by municipal permit holders include: storage tanks, sewer separation, inflow and infiltration reduction, treatment of CSO discharge, green infrastructure, water conservation, and sewer system optimization.  Regional and municipal alternatives will be combined in the Long Term Control Plans so that both municipal and regional permit holders meet requirements to reduce combined sewer overflows and water quality standards.

Who will be held responsible?

Although the municipalities and sewer treatment plants have been working collaboratively for the last five years, each permit holder will be issued their own permits and will be held individually responsible for meeting permit requirements.

Both regional and municipal alternatives to combined sewer overflows will have community impacts and benefits. It is important for residents to review the Development and Evaluation of Alternatives Reports (DEARs) and look at both the regional reports and the municipal reports or appendixes that include municipal alternatives to understand the options that are being considered.  A list of regional alternatives is also at the end of this post and the Sewage-Free Streets and Rivers campaign developed fact sheets for nine of the reports. Permit holders are now in the process of selecting infrastructure upgrades from the alternatives they evaluated in the DEARs and will decide what they will include in their Long Term Control Plans. Ask your CSO contacts for more information on the options they are considering and to release their draft Long Term Control Plans to the public for comments before they submit their plans to the NJDEP.

List of regional and municipal alternatives from the DEARs: