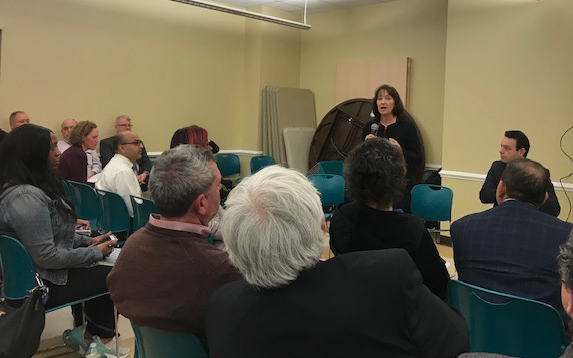 This listening session is part of the DEP’s efforts to support environmental justice in New Jersey.  DEP Commissioner Catherine McCabe and Paterson Mayor Andre Sayegh greeted a full room of Paterson residents to hear and about the environmental issues facing the community. Commissioner McCabe engaged residents by saying that, “we need you to point us to where we need to focus here in Paterson.” She brought representatives from her department and other departments integral to supporting environmental justice, such as the Department of Economic Development and the Attorney General’s office, to answer questions brought up by community members.

Several community members raised concerns about flooding. One resident described a sewer stench during rainstorms. Susan Rosenwinkle, Bureau Chief from the Division of Water Quality explained that Paterson is one of 21 cities with combined sewer systems and that the City of Paterson is working on a plan to reduce combined sewer overflows. She also committed to looking into the specific source of the odor.

Illegal dumping was another major concern that was raised as well as air pollution, water quality, and the impacts of contaminated sites on surrounding neighborhoods. The DEP stressed the importance of identifying problems and making them aware of it. Although the DEP could not address every issue raised, they said that they would work with the City of Paterson to address these issues and that this would be part of a continued effort.