On Tuesday, January 28, 2020, several members of NewarkDIG (Doing Infrastructure Green), a Sewage-Free Streets and Rivers partner, made a presentation to the Newark City Council on the upcoming final report of the Combined Sewer Overflow (CSO) Long Term Control Plan (LTCP). NewarkDIG presented for 45 minutes bringing council members up to speed on the basics of CSOs, a brief history of the permit regulations, a review of the considered alternatives and a breakdown of the costs. A key component of the presentation was a discussion of the importance of community outreach and input. We specifically asked the Council members to take action in partnering with us and other community groups to host meetings sharing information about stormwater and the LTCP. Additionally, we asked that the Council approve the upcoming sewer rate study to be proposed by the Water & Sewer Dept., to begin work on stormwater ordinance changes for developers, monitor regional plans to be certain that the needs of the City of Newark are not ignored and to stay involved and aware as they will need to approve the final LTCP in order to secure funding for implementation. Council members present remained engaged, following along with the slide deck, and were prepared with questions at the end of the official presentation.

After a history of the NewarkDIG collaborative by Kim Gaddy of Clean Water Action and the NewarkDIG Green Infrastructure Reformer Coordinator, Nicole Miller emphasized the importance of Newark administrative and council officials taking ownership of the process to keep our streets and rivers clean and safe. After all, they are the final decision-makers and action-takers with regard to the LTCP, which is due to be completed by June 1.

Drew Curtis of Ironbound Community Corporation stressed the important role of speaking to and hearing from the community on these long-range infrastructure plans. The goals of the LTCP permit process require a reduction of CSO events or volume along with a reduction of harmful pathogens in waterways as a result of CSOs. Drew brought up the many community meetings we and our partners have held that have identified the additional goals of reduced basement and street flooding, the need for community funds to be used for community benefits (such as green space) and the importance of local jobs to come out of this local infrastructure spending. In fact, there are two pilot programs focused on national green infrastructure training certification happening in the city that could be expanded.

Dr. Chris Obrupta with the Rutgers Water Resources Program explained that green infrastructure’s benefits extend beyond stormwater retention and can even aid in job creation, climate resiliency, heat island reduction, among other efforts. Dr. Obrupta noted that none of the alternatives would solve the problem on their own and recommended that the Council consider not just the base requirements of the permit but also what additional benefits could be gained by combining alternatives creatively.

Council President Crump suggested an internal committee set up within the Council to monitor and focus on the CSO Long Term Control Plan. Councilman Gonzalez was especially interested in making sure our community outreach was more robust and he volunteered to chair the subcommittee. Councilman Osbourne also volunteered to join the committee. Councilman Gonzalez was also vocal about Newark requiring new building development to have stormwater control. He suggested to his fellow council members that they should amend the zoning ordinance to meet this requirement.

The response of the council members was precisely what NewarkDIG was looking for when we set up the meeting. We have plans to re-engage with the Council’s internal committee as more information becomes available on the LTCP. NewarkDIG and partners will also continue to bring members of the community from different wards forward to speak to the Council on street and basement flooding and the need for infrastructure changes that address those issues.

Students from Winfield Scott School #2 in Elizabeth learned about combined sewer overflows, as part of a new education and outreach program implemented by Future City Inc. The program provided 88 students from third, seventh, and eighth grades with Rotary International dictionaries as a vehicle to for information about Combined Sewer Systems and the Sewage Free Streets and Rivers campaign. Most students, like most adults, did not know about CSOs until Future City Inc.’s presentation. 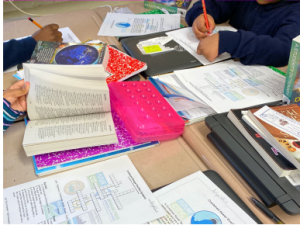 Each student received a dictionary and used it to complete crossword puzzles with words relating to CSOs. Students discussed the challenges of CSOs and brought home flyers in English, Spanish, and Kreol to continue the discussion with their families. During these discussions, students explored what they can do to keep their streets clean. Students left the program reporting that they gained new understanding and appreciation of the importance of keeping litter out of their streets, and pledged to help prevent overflows.

This outreach and education program was supported by a capacity building grant from the Sewage-Free Streets and Rivers campaign.