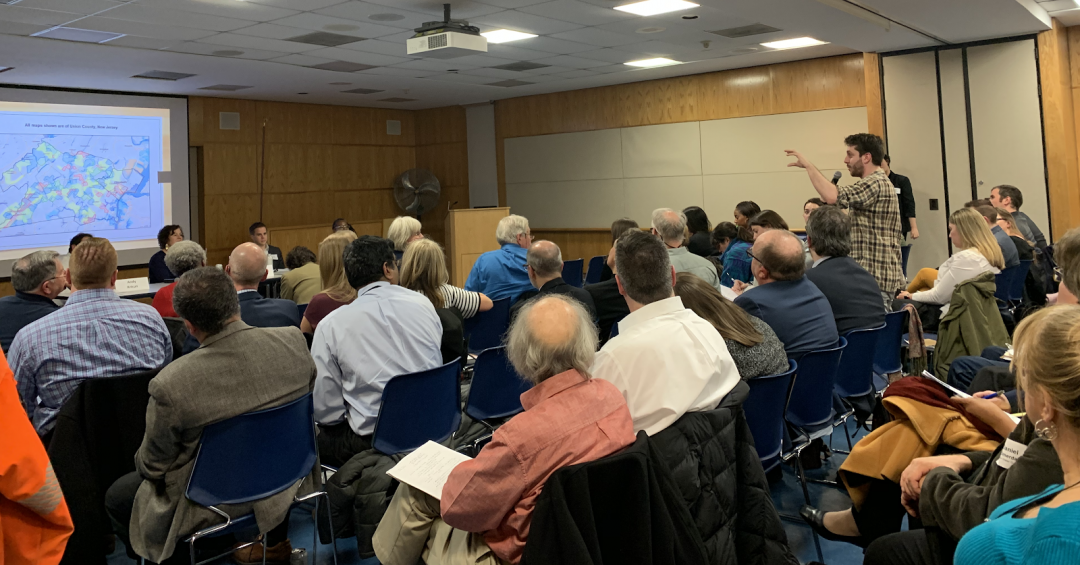 In New Jersey, 21 fast-growing communities with outdated sewer systems that combine rainfall with industrial and domestic sewage are finding they are particularly vulnerable to the effects of climate change. When it rains in these communities, raw sewage pours into rivers and backs up into basements and onto streets, known as Combined Sewer Overflow (CSO). Increased flooding from sea level rise, more intense storms, and extreme heat due to climate change are compounding the existing environmental and health concerns in New Jersey’s CSO communities.

New Jersey Future hosted this event in partnership with the Sewage-Free Streets and Rivers campaign and the New Jersey Climate Change Alliance on January 28 in the city of Elizabeth to discuss the importance of the state’s CSO communities incorporating climate change as a critical factor in planned upgrades to wastewater infrastructure systems.

Approximately 80 community members, engineers, utility directors, environmental advocates, students, design professionals, and media attended the forum at which CSO and climate change experts discussed integrating climate change solutions into CSO Long Term Control Plans (LTCPs). The communities’ LTCPs are due to the New Jersey Department of Environmental Protection (NJDEP) by June 1 and will be implemented over the next 30-50 years while towns are simultaneously battling climate change. Governor Phil Murphy recently signed Executive Order 100, which requires the integration of climate change and sea level rise into the state’s regulatory and permit programs, including CSO permits.

The panelists discussed adding green infrastructure to towns as a solution to help reduce CSOs as well as flooding and extreme heat due to climate change. The need for creative solutions to address the impacts of climate change related to CSOs was highlighted, as was the importance of environmental justice and engaging communities in solutions. Cost was a prominent topic of discussion, given that the wastewater infrastructure improvements are expected to cost billions of dollars. Implementing the plans will have significant effects on residents and business owners in the CSO communities for generations to come.

Attendees were urged to continue the conversation started at the forum in their own communities and with their elected officials and utilities by asking them how they are considering climate change in selecting alternatives to CSOs. Three important questions residents can ask are:

New Jersey Future is a state leader in the area of wastewater infrastructure, including CSOs, as part of its mission to make smart investments in infrastructure to increase New Jersey’s competitiveness and support healthy communities where people want to live and work.

Join the Sewage-Free Streets and Rivers campaign today to stay up-to-date on the process and opportunities to review and comment on the CSO LTCPs.

Groundwork USA Climate Safe Neighborhoods – Maps that show the connection between housing discrimination and climate change and how Groundwork communities are using maps and data to build resilience to extreme heat and flooding.